Ever since Darwin first hinted at evolution after his 1835 trip to the Galapagos Islands, scientists have been eagerly following in his footsteps and exploring the unique endemic species that call these volcanic islands their home. October of 2015 will go down in history as another important date in Galapagos conservation, as a Yale research team has announced the identification of a new species of giant tortoise on Santa Cruz Island, making it the first new tortoise species identified in over a century.

Led by senior researcher Gisella Caccone, an evolutionary biologist and conservation geneticist from Yale, the team began its work in 2003, when herpetologist Tom Fritts recommended that they focus their attention towards a small population of tortoises that lived on eastern Santa Cruz and had a few morphological differences from the main Santa Cruz species, living on the western side of the island.

“I thought maybe they could be different populations of the same species,” said Caccone of the two Santa Cruz tortoise populations. “So I would expect some genetic differences between them if they lived [apart] in reservation for a while. But what I didn’t expect was that they were not even closely related to each other, because their closest [relatives] are from different islands.” According to Caccone, this introduces the surprising hypothesis that “the island of Santa Cruz was colonized twice, from two different islands, from two different lineages of tortoises that therefore are not each other’s closest relatives, [because] the divergence of these two species does not occur on Santa Cruz, but on different islands.” This discovery was just the most recent piece of a research project that Caccone has been heading up for over 20 years in the Galapagos Islands.

Looking forward, Caccone jokes that they will next be doing a “Lazarus project” of sorts, as they attempt to bring back certain species from extinction by finding and breeding hybrid tortoises that share DNA with species that have died out. “We have this interesting story,” she explains. “We have these species of DNA that are inside animals of a different species. And so the idea is to bring them [the hybrids] back to the [Breeding] Station and breed these animals that are hybrids (and some of them also are F1, meaning first generation, so 50% of their genome is from the extinct species). So we’ll breed them together […] It’s a really cool story.” 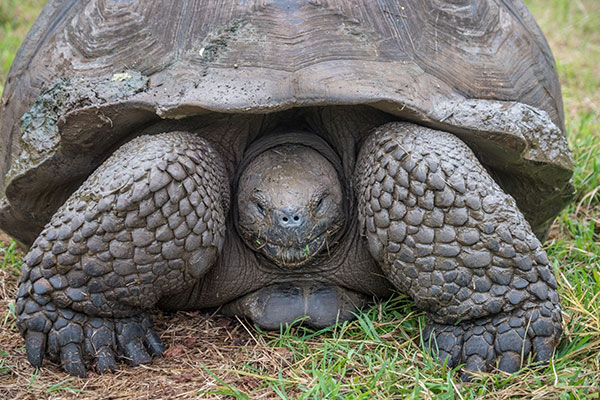 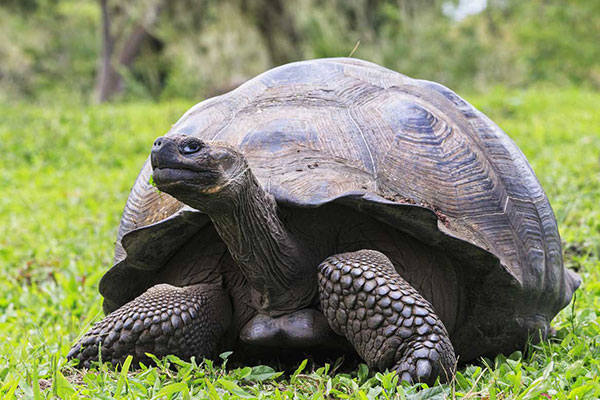 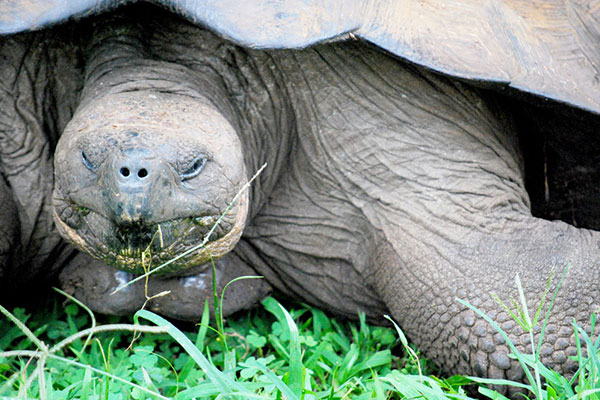 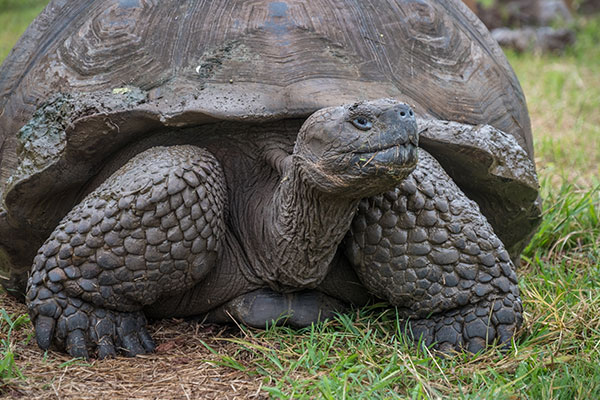 The new species was found in “an arid, lava-laced lowland” known as Cerro Fatal, according to The New York Times.

Caccone believes this has impacted their morphological development – in order to reach tall cactus trees, she notes that tortoises in more arid regions have evolved a sharper saddleback carapace that allows them to extend their necks higher.

Of course, this also means that they are more exposed to threats, but since the tortoise has no natural predators on the Islands, this has not been a problem.

This new species has a population of less than 300 tortoises, making them the smallest tortoise population by species. They live on the Eastern side of Santa Cruz, as opposed to the Chelonoidis porteri, which lives in the highland region of the western side of the island.

Because there is more moisture in the mist-covered highlands, the porteri species have better access to vegetation and have therefore been able to evolve a more protective cupola dome carapace.

The study involved DNA comparisons between the Cerro Fatal population and all other known populations of tortoises.

In order to protect the animals, researchers extracted blood from the animals and browsed museums all over the world for specimens that could be used as their holotype, or base sample. With a well recorded database to draw from and 12 years of research and data collection of their own, the team was able to successfully identify this as a distinct species.

When they made this discovery, Caccone recalls, “We were utterly astounded. [But] it still took a long time to make sure that what we were saying is correct.”

What’s behind the name “Donfaustoi”?

This new species has become the 14th identified species of tortoise in the Galapagos Islands and will be designated “Chelonoidis donfaustoi,” in honor of the recently retired Galapagos Park ranger, Don Fausto, who dedicated 43 years to preserving the lives of endangered Galapagos tortoises.

This designation marks a divergence in how species are normally named. “All the other species are named after white, old, British (probably) explorers,” says Caccone.

“I just wanted to honor the contribution of the people from Ecuador and the Galapagos by naming a species after them. And I think it was about time.” She remembers working with him while she conducted her research, and notes that a big part of the reason that she chose to name the species after him was because he is “incredibly dedicated and very shy and humble.” But through the years, his expertise in breeding tortoises has been an integral part of repopulating species that were on the brink of extinction.

As the species’ namesake reflects, this is a hugely important discovery for the conservation of the tortoise species in the Galapagos Islands. Now that there is hard scientific data that distinguishes this species from the other giant tortoise populations in the Galapagos Islands, the National Park can start taking steps to understand it and learn how to best protect it.

For years, during the 20th century and before, tortoises faced hunting by both invasive species and greedy whalers. Since they can live for months or sometimes years without food, whalers would take the live tortoises and store them in the hulls of their ships until they were ready to prepare them. Tortoises also became unfortunate victims of the invasive rats and goats that were introduced to the Galapagos Islands.

Now, the National Park has worked hard to get rid of these invasive species and protect the tortoises from whalers. However, in some cases, this response was too little, too late. For example, in 2012, despite persistent, yet unsuccessful breeding efforts, the iconic Lonesome George, the last of the Pinta Island tortoises, died, after no suitable mates could be found to carry on his genes. Interestingly, Don Fausto was in fact George’s long-time caretaker as well. Hopefully, George’s plight will be the last case of tortoise extinction in the Galapagos.

After decades of working with the Conservancy and National Park, Caccone is optimistic that they will be able to protect this new species. She reflects on the repopulation project that occurred with the Española species of tortoise – when the National Park began their location and breeding program in 1972, there were only 12 adult tortoises left, due to the effects of the invasive rats. Now, just 40 years later, there are over 1,000 Española tortoises, with the first generations beginning to be re-introduced to the wild and reaching sexual maturity. They’ve even begun to reproduce independently, notes Caccone.

If this is a measure of what their dedication and care is capable of achieving, then she feels that the future is bright for other Galapagos species. “I am an optimist by nature,” she says. “If we can find new giant, vertebrate species in the Galapagos, we are just getting it all started. So I think there is a lot of work to do. And we can do something to curb some of the extinctions that we are responsible for.”