What Animals Are Most Commonly Seen in the Galapagos?

Animals Most Commonly Seen in the Galapagos

So, you’ve bought your ticket to the Galapagos Islands, blocked out the dates on your calendar and now it’s time to discover what is truly behind this world-renowned archipelago. With some of the highest rates of endemism in the world, there’s no scarcity of unusual life to be found on the islands; however, not all of these species are as regularly seen as others. Here is a list of some of the most commonly seen animals in the Galapagos Archipelago.

Galapagos Giant Tortoises are unashamedly one of the most iconic animals to inhabit this archipelago, even giving the islands their name. Fortunately, extremely fruitful conservation efforts have brought most of the Galapagos Tortoise populations back to healthy numbers, but this was not always the case. Galapagos Tortoises are able to survive for up to one year without any food or water, making them an excellent fresh meal for tired sailors back in the 17th, 18th and 19th centuries. These days, park visitors are able to observe the tortoises in their natural habitat, as well as through the ongoing breeding and repatriation programs at the Charles Darwin Research Station.

The Galapagos Archipelago is the only place in the world that is home to sea-going lizards, known as marine iguanas. While these salt-encrusted creatures with their smashed-in faces are not much to look at, they hold some extraordinarily unique features. For example, marine iguanas have evolved with special glands that collect excess salt from their blood stream, which they ingest from the ocean algae. You will likely see them sneezing it out as they bathe along the shore under the equatorial sun. 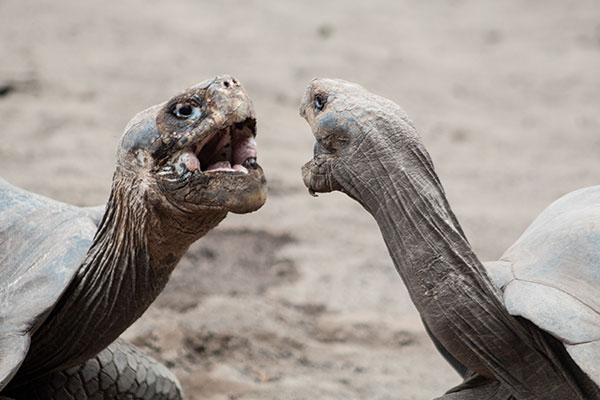 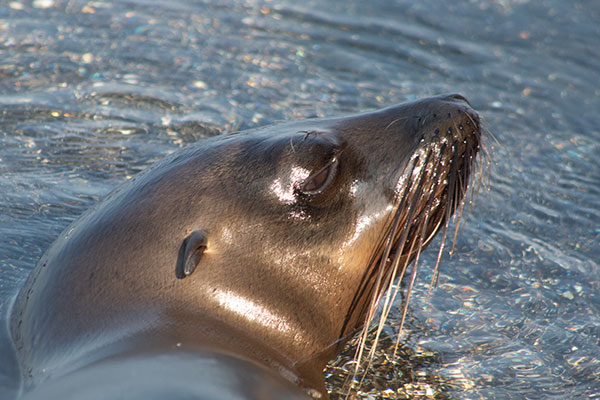 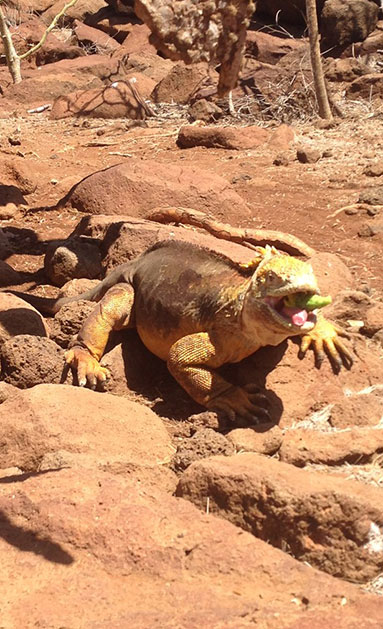 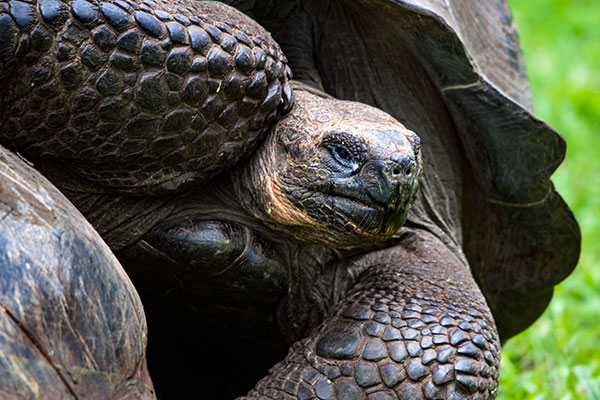 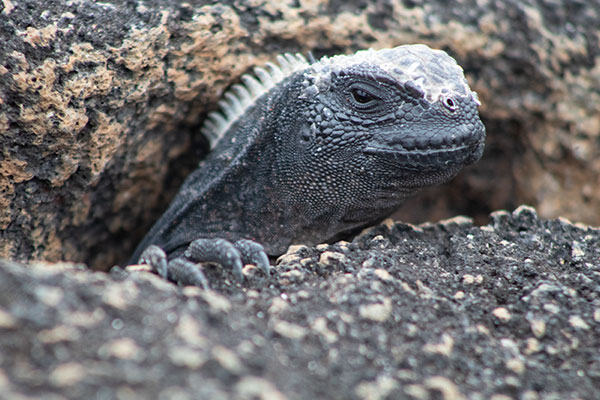 A visitor to the Galapagos Islands is also bound to come across one of the three species of land iguana that inhabit the archipelago. Like their marine counterparts, they also have a series of their own unique adaptations. One of the most peculiar ones is behavioral. Land iguanas have developed a beautiful symbiotic relationship with Darwin Finches, which remove the ticks and other pests from the folds of the lizards’ skin. The iguanas can even be seen raising themselves off the ground to allow the birds a better angle. Be careful to watch your step as you walk along the island paths, though, because the lounging reptiles are not likely to move out of your way!

One of the first animals you are bound to come across is the Galapagos Sea Lion, as they are often sprawled out over park benches or along walking paths. This species of sea lion is not technically a seal, as it is able to rotate its hind flipper. Yet, interestingly enough, this characteristic allows it to “run” at quite impressive speeds, even exceeding that of a person running on a rocky terrain. Keep this in mind as you see them lounging around the islands – they are not as lazy as they first appear!

The Galapagos Finches or Darwin Finches are among the most renowned species in the world within the study of evolution. These small, seemingly plain land birds are now thought to be the fastest-evolving vertebrates in the world and have redefined our understanding of speciation. As the Galapagos Islands have developed, Darwin Finches have evolved into approximately 14 species, each distinctly adapted to its own particular niche. Visitors will be able to spot these birds on almost every island in the archipelago, yet each variation looks deceitfully similar. Try to pay close attention to their beaks and see if you can spot the differences.

The Galapagos Islands are literally bursting with life in all of its forms, and there are hundreds of wildlife species to see while visiting the archipelago. However, even the most common species on the islands show incredible adaptations to their unique environment, unequivocally proving that the archipelago is truly a living laboratory.