Fernandina Island is located at the westernmost point of the archipelago. It is the youngest geologically and the most volcanically active of the Galapagos, as it is located very close to its tectonic plate hot spot. The island is about 17.4 miles (27.8 km) wide and 21.12 miles (34.9 km) long, making it the third largest in the Galapagos. It is home to a wide variety of fauna, such as large populations of marine iguanas, sea lions, and flightless cormorants, unlike its flora, which is rather limited.

The island’s Spanish name, Fernandina, honors King Ferdinand of Spain, who was the sponsor of Christopher Columbus’ voyage. Fernandina has no human inhabitants, which keeps the island in pristine condition, but it is frequently visited by tourists who come to see its unique wildlife and lava landscapes.

Fernandina’s arid terrain is composed mainly of lava flows and volcanic rock, making flora mostly scarce. Aside from the mangroves, which occupy a large area in Fernandina, a plant unimaginably made its way to grow and survive in this harsh place known as the lava cactus. Its last eruptive process was recorded in 2020. Eruptions are frequently accompanied by a cloud of ash and steam that forms with pyroclastic flows descending the volcano’s slopes, reaching the sea. 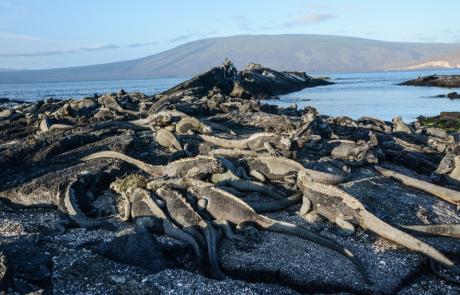 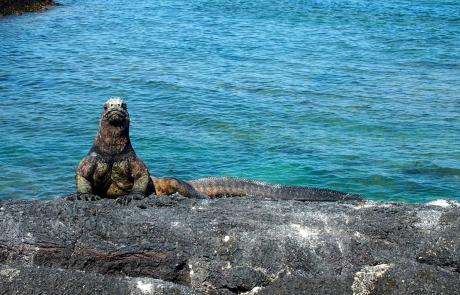 Being the third-largest island in the archipelago, it has incredible places to visit, an immense variety of wildlife, and incredible lava landscapes everywhere you look. It also offers the opportunity for spectacular activities such as snorkeling, exploration, and wildlife observation.

Punta Espinoza is a magical place that will show you landscapes that look like something out of a science fiction movie. You will see the impressive lava forms that hundreds of years of eruptions have created as soon as you arrive. You will learn the history and curious characteristics of the two types of lava that form this island, the A’a and the Pahoehoe, where small lava cacti have been given ways to grow and create one of the most picturesque cactus forests in the archipelago. You will also contemplate one of the archipelago’s largest colonies of marine iguanas, flightless cormorants, Galapagos penguins, Sally Lightfoot crabs, and if you are lucky enough, the incredible Galapagos hawk.

This is a great place to see the underwater life of the Galapagos, either from a zodiac or snorkeling. Being a nesting site for penguins and flightless cormorants, you may have the opportunity to see them swimming around you, as well as the playful Galapagos sea lions. Don’t be afraid, they are the friendliest animals on the planet. Of course, you will find much more amazing underwater wildlife, such as marine iguanas, green turtles, rays, sharks, sharks, seahorses, and colorful reef fish.

If you are an experienced diver, this is the place for you. Thanks to the enormous amount of nutrients in the waters of the Galapagos, this dive site attracts a large number of diverse marine species, making it a spectacular underwater spectacle.

Fernandina’s wildlife is very particular since none of the animal species that inhabit it here have been introduced. As we have already mentioned, Fernandina has a great variety of land and underwater species. Here are some of the most representative of the island:

Marine Iguanas: They are a unique species of the Galapagos Islands and, like many of the animals we will name in this list, have had to adapt to the conditions of an archipelago of volcanic origin. On the outside, their appearance is very similar to that of a land iguana, but they are easily distinguished by their brick and dark green colors and flattened tail. Their ability to dive into the water for up to 45 minutes to search for food is an incredible characteristic for a reptile that must use the sun’s rays to warm its body and stay alive. They feed primarily on algae, and the males dive for algae, unlike the females who take advantage of low tides. In addition, if they find it challenging to get algae, they eat land plants without any problem.

Flightless cormorants: Fernandina is home to a huge colony of this species, where approximately 1500 individuals live and are currently under conservation. The flightless cormorant is a curious bird that will capture your attention, as it is one of the few birds in the world that does not fly. Being an endemic species of the Galapagos Islands, it demonstrates its adaptation to the environment and its evolution. This bird exchanged the sky for the depths of the sea, and being in places where the food on land is scarce, it had to find a way to feed itself, and what better place to do so than the Galapagos sea? Its appearance is somewhat curious because, in order to dive into the water in search of food, it reduced the size of its wings to function as fins that give it impressive underwater agility.

Sea lions: These friendly fellows are endemic to the Galapagos and can be observed in the rocky areas of Fernandina, where they spend most of their time, except when they go out to look for food.

Galapagos penguins: These elegant little friends are an endemic species, very scarce, with less than 2,000 specimens, and most of them are found on the rocky coasts of Fernandina and Isabela. They are the third smallest penguins on the planet and are incredibly aerodynamic, which helps them move nimbly underwater at speeds of up to 35 km/h (22 mph).

Zayapa crab: The Zayapa, also known as Sally Lightfoot Crab, is an abundant species in Fernandina and is usually found near marine iguanas, mainly to feed on the leftover food they leave behind, although their primary food source is algae. When they are born, they are gray; in their adult life, they acquire brown to reddish colors on the carapace and blue on the underside.

Lava gull: The lava gull is an endemic and scarce species of Galapagos, it is the only one native to the archipelago of the four present in it and has the smallest population of any gull in the world. It is estimated that there are less than 1000 individuals altogether. The adult is easily identified by its sooty gray body, black head, white crescents above and below the eye, and pale rump. The juvenile is grayish brown with cinnamon scales on the back, wings, and a pale rump. It is found along the coast, rarely venturing inland or far out to sea. Forages on beaches and rocky shores often perch on boats and docks. They feed on fish and small crustaceans or what they steal from the nests of other animals. They are solitary nesters and do not have a specific nesting season all year round. They incubate two eggs for 24 days. When they reach adult size, they get 45 cm in length and 90-100 cm in wingspan.

Lava heron: The lava heron is another curious species endemic to the Galapagos Islands that has adapted to the archipelago’s unique ecosystem. Its lead-colored plumage and shiny silver back make it blend in with the lava rocks. They are quite small birds, the males reaching the largest size, up to 39 cm. Their preferred living area is mangroves and rocky areas, so they have plenty of space in Fernandina. Their diet is based on crabs or small fish, but they have also been observed feeding on flies, which are piled up on cactus, and even smaller birds.

Galapagos hawk: It is one of the rarest raptors in the world, with an estimated population of only 150 breeding pairs, and is endemic to the Galapagos. Adults are easily recognized by their dark brown, sometimes almost black plumage. On the other hand, juvenile hawks have a less noticeable cream plumage that serves as camouflage and keeps them safe from predators. Adult hawks have an average wingspan of 120 cm, a slender tail, and strong claws. Like many raptors, females tend to have a larger wingspan than males. Galapagos hawks feed mainly on invertebrates, such as giant centipedes and lobsters, but also occasionally prey on snakes, rodents, lizards, young iguanas, tortoise hatchlings, and other birds. They are also some of the primary scavengers in Galapagos, feeding on carcasses with their strong beaks. Males are monogamous, although females may mate with up to seven males during the nesting period. These males help raise the chicks (usually three in a clutch) by taking turns incubating the eggs and feeding the young. Nests are generally located low in trees, lava ledges, or ground.

The giant tortoise of Fernandina: In 2019, a female giant tortoise that had been presumed extinct for more than a century was found on the island. For conservation and study purposes, it was transferred to a protection center, where a captive breeding project was initiated to repopulate Fernandina with this species subsequently.

Other Islands in the Galapagos to Explore