Experience one of the four inhabited islands of the Galapagos Islands on the beautiful Floreana Island, an island in the far south of the archipelago also known as Charles Island and Santa Maria. Home to a variety of beaches teeming with endemic flora and fauna, vibrant underwater life, and highly-curious human history, the 173-square-kilometer (67-square-mile) island is a highlight of any Galapagos tour.

Unlike most places in the Galapagos archipelago where humans have scarcely made a mark, Floreana has a uniquely rich human history. The presence of freshwater made the isle a frequent stop for sailors, pirates, and whalers in the 18th and 19th centuries — so much so that a creative postal system was even established on what’s now known as Post Office Bay. It’s also the site of the first Galapagos settler, the cunning Irishman Patrick Watkins.

Perhaps the most intriguing tale told and retold on the island is the mysterious Galapagos affair. In the late 1920s, three groups settled on Floreana: physician Friedrich Ritter and Dore Strauch, the Wittmer family, and Baroness Eloise Wagner de Bosquet with her two lovers. A few years later, conflict struck between the Baroness’ two lovers. After choosing one over the other, she vanished with her chosen companion; meanwhile, the spurned lover was found dead on a nearby island. Not long after, Ritter died of food poisoning, while Strauch returned to Germany where she ended up dying in a mental institution.

Ultimately, only the Wittners were left on Floreana — and descendants of the original family remain on the island to this day. 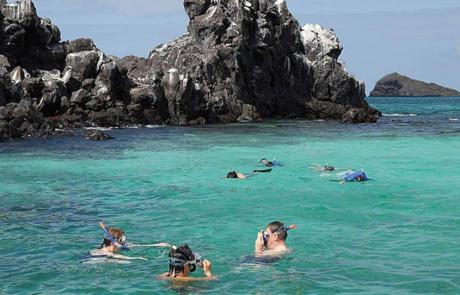 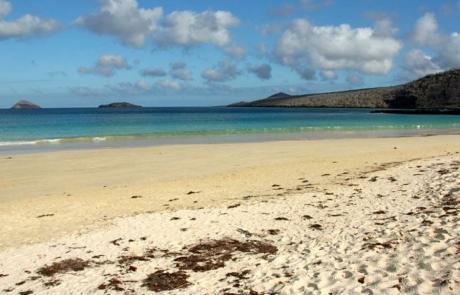 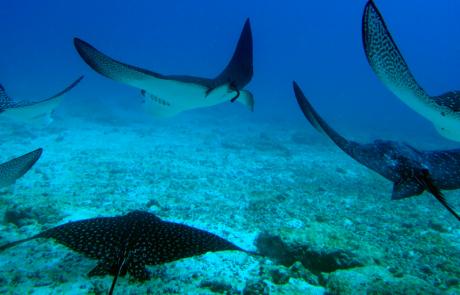 Most of the island’s 100-or-so permanent residents live in Puerto Velasco Ibarra. The quiet port town is home to the only hotel on the island, Pension Wittmer, a rest house still owned and run by the Wittmer family. Located in front of the hotel, Black Beach is a picturesque stretch with dark sand and deep blue waters. Friendly sea lions will often join swimmers and snorkelers in the water.

One of the most interesting sites on Floreana, Post Office Bay is where the island’s unique postal system was set up in the late 18th century. Without any other way to send letters home, whalers and pirates at sea left their mail without postage in an old wooden barrel on the bay. Fellow sailors on their way home will often sift through the mail and take the letters addressed to their hometown to deliver them by hand. To this day, travelers can take part in the tradition and leave postcards in the 200-year-old barrel in hopes of other travelers will take them back to their country.

After leaving postcards, travelers can trek up Baroness Viewing Point to enjoy the tranquil scenery. Keep your eyes peeled for wildlife like Darwin’s finches and lava lizards.

Two beaches make up Cormorant Point on the northern tip of Floreana Island; one is dubbed Flour Beach with pristine white coral shores, while another is a standout with eye-catching green sand due to the presence of olivine crystals from volcanic rocks. There’s also a pretty lagoon where there’s a wide variety of coastal birds and a healthy population of the Galapagos flamingo. A 1-mile (1.6-kilometer) trek will take travelers to a viewpoint overlooking the two beaches.

Devil’s Crown is one of the best snorkeling sites in the Galapagos Islands, a must-visit spot consisting of a partially submerged volcanic cone eroded by the water. It’s a breathtaking underwater idyll, with marine life like white-tipped sharks, Galapagos sea lions, rays, eels, sea turtles, and even the occasional hammerhead shark and Galapagos penguin. Birds like boobies and frigatebirds often land on the volcanic rocks protruding from the water. Due to strong currents and rocky waves, only experienced swimmers are recommended to swim in these waters.

Also found off the shore of Floreana is Champion Islet, a rocky islet that’s another popular snorkeling and scuba diving site in the Galapagos. Marine animals spotted in the waters surrounding Champion include Galapagos sharks, sea lions, hammerhead sharks, sea turtles, and colorful tropical fish. Birds like blue-footed boobies, penguins, and frigatebirds are also present, but the islet is best known for being one of the last two habitats of the critically endangered Floreana mockingbird. Other small islets around Floreana include Enderby and Gardner islets.

Witness the site of the first human settlement at Asilo de la Paz in the Floreana highlands. The trek can be quite arduous, winding through a lush Scalesia forest, a giant tortoise breeding center, and a freshwater spring that made human settlement possible. Here, modern explorers can also take a peek at a small cave that used to be inhabited by pirates. It’s a surprisingly cozy living space, with the rocks carved into beds, shelves, and even a small fireplace. Different species of Darwin’s finches may also be spotted, while the nearby Cerro Alieri is excellent for plant-loving explorers, with over 48 plant species identified at the site.

Despite the strange and intriguing history of Floreana’s human inhabitants, the spotlight remains on the animals. The Floreana mockingbird is one of the most famous creatures on the island, one of the rarest Galapagos mockingbird species only found on two places on earth: Champion and Gardner islets. The critically endangered species used to thrive on Floreana, but the introduction of feral goats on the island wiped out the population. Now, there are less than 200 individual Floreana mockingbirds in existence.

Another extinct species is the endemic Floreana giant tortoise, but there is a breeding center on the island for the San Cristobal giant tortoise. Travelers may also spot green sea turtles on Floreana Island, especially between December and May when these creatures lay their eggs on the beach.

For sightings of the iconic pink Galapagos flamingos, Cormorant Point is one of the best places to visit in the archipelago. It’s also worth roaming the island for a glimpse of iconic Galapagos wildlife, including marine iguanas, blue-footed boobies, Galapagos hawks, and multiple Darwin’s finches.

The easiest and most convenient way to explore Floreana Island is to join a Galapagos Islands cruise that has it on the itinerary. Travelers may also participate in a Floreana day tour from the nearby Santa Cruz Island. Alternatively, it’s possible to stay on Floreana for a few nights as it’s one of the few islands in the Galapagos archipelago with accommodations.