Information On Each Important Galapagos Island

Information on the 15 Most Important Islands in Galapagos

Below we review the top-15 islands to visit in the Galapagos and the top things to do and places to see on each of those islands.

There are a litle over 70 terrestrial visitor spots on the Galapagos Islands, and normally two (and maximum three) visitor spots can be visited per day during a cruise. So, choose your cruise itinerary wisely to make sure you get as many of your personal “must see” visitor spots as possible during your cruise.

Also, different months of the year have different wildlife activity on each Island, (want to see the blue footed boobies’ mating dance?). Rake sure to revise this page that details the climate and best times to go for major wildlife events for each month of the year.

Bartolome Island is located just off of the larger Santiago Island, and is one of the most graphic examples of the volcanic nature of the Galapagos. Most boats stop at the beach of Bartolome where there is excellent snorkeling opportunities, including, if your lucky, a chance to swim with Penguins! There is also a spectacular hike that climbs to the summit of the island, which reveals first a variety of colorful volcanic formations. The view from the top is perhaps the most photographed vista in all of the Galapagos, don’t forget your camera.

Española Island is located at the southeast end of the archipelago and is well known for nesting albatrosses and other rare bird species. Punta Suarez visitor spot is a rocky point with one of the most impressive and varied colonies of sea birds in Galapagos. Most notable are the Galapagos Albatross, especially during March, April and May when nesting is at its height. At the far end of the island from where your hike starts, high cliffs rise p from the sea, with spectacular views of soaring birds and th famous blowhole that sprays wate up to 75 feet (25 meters) into the air. The second point of interest on Espanola is Gardner Bay, which is located at the eastern end of the Island and provides an excellent beach for swimming with sea lions. 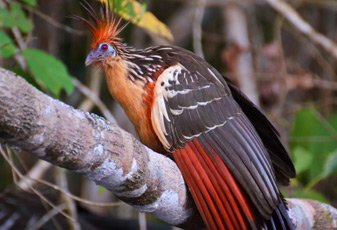 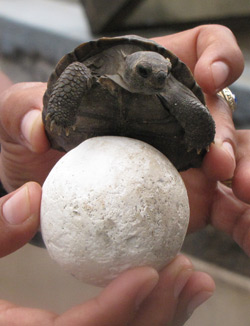 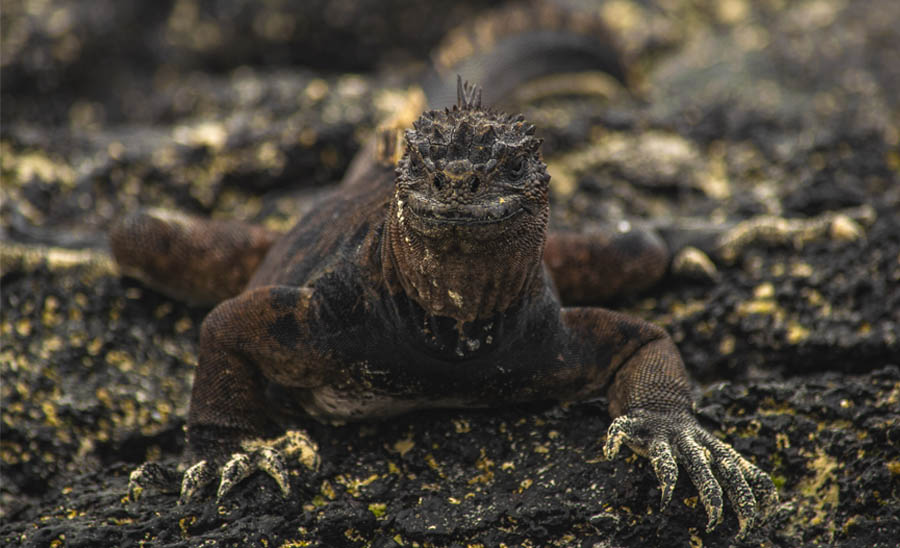 Santa Cruz Island Is home to the Galapagos’ largest town, Puerto Ayora in addition to The Charles Darwin Research Station (the most visited of all visitor spots), and the National Park headquarters. Tortuga bay is an expansive white sand beach a few miles hike from town and is a popular half-day excursion.

Turtle Cove, an impressive Galapagos marine site, consists of a deep maze of a tranquil seawater inlet. Its waters are still, often murky, and are the resting (and sometimes mating) place for marine turtles, rays, and small sharks. Cerro Dragon, a newly opened visitor site, is located in the north of Santa Cruz Island, and provides access to a hypersaline lagoon, which is saltier than the ocean.

Isabela Island, the largest island in the Galapagos has myriad points of interest. Urvina Bay, on the western coast of the Island, at the foot of Alcedo Volcano, was uplifted from the sea in 1954. The site is relatively flat, distinguished by sun-baked coral reef remnants and other marine formations, which were lifted out of the ocean. Flightless cormorants and pelicans nest along the coast during their nesting seasons. A tour along the cliffs of the Caleta Tagus (Tagus Cove) provides sensational views of the exclusive Galapagos penguin, the flightless cormorant, and other sea birds. Elizabeth Bay is an extremely interesting area for observing many different forms of marine life. The Experimental Station is located very near the Villamil port in the south of Albemarle. The Galapagos National Park conducts experiments to learn more about the reproduction process of the subspecies of tortoise (Geochelone elephantopus gunteri). White-tipped sharks can be observed on a five-minute dinghy ride from Villamil Port in Las Tintoreras.

Alcedo Volcano is one of five shield volcanoes that form Isabela Island. There is a famous “Geyser” or a hot steam fumarole, on the west side of the caldera that is often surrounded by the giant Galapagos tortoises specific to Alcedo. At least one night should be spent on the rim to fully appreciate the beauty of the area (something that very, very few visitors get to do).

Volcano Sierra Negra, located at the southern end of Isabela Island, is one of the best and most impressive examples of a volcano in the archipelago. Following the edge of the caldera to the north Volcan Chico is reached.

Volcan Chico comprises of a group of small active fumaroles craters. The Sulfur Volcano, an active fumarole, located in the surrounding area, expels large amounts of sulfur that over time has been deposited in the area creating a unique landscape. Volcano Sierra Negra caldera is the second largest in the world after Ngorongoro in Africa.

Fernandina Island, the western-most island is an active shield volcano and geologically is the youngest of the Galapagos Islands. The large island is a singular, active volcano that provides an impressive backdrop for the main point of interest on the island: Punta Espinosa. Here you’ll find a stretch of sand and black lava rock extending from the base of the volcano into the sea. Best known for its large colonies of marine iguanas, it is also home to a number of Galapagos species including the Galapagos penguin, flightless cormorant, sea turtles, and playful sea lions. Fernandina’s recently formed jagged volcanic slopes can be best appreciated by hiking inland to the edge of a large ah ah lava flow (a type of lava flow named after the sound you make after trying to walk over it barefoot, ouch, ouch!).

Floreana, the first Island to have human inhabitants, has four notable points of interest. First, Punta Cormorant has one of the best flamingo lagoons in the Galapagos settled behind a beautiful beach. A variety of shore birds and numerous, and unique species of plant life are also available to view in the area. The second point of interest, Devil’s Crown consists of a picket fence-like remains of the small volcanic cone, eroded away by the sea, creating an interior habitat ideal for several different types of coral and marine life. It is a perfect spot for snorkeling. The third point is a spectacular Lava Cave, and the fourth points of interest are the Post Office Barrel (a wooden barrel placed on Floreana in the 18th century by the crew of a whaling ship in order to communicate by mail). There is a small town, Puerto Velasco Ibarra, and even a hotel run by the Wittmer family, long ago involved in the “Galapagos Affair” a melodrama that ends in mysterious murders highlighted in a popular 2014 documentary film.

San Cristobal is home to the second largest human population on the Islands, Puerto Baquerizo Moreno. The town and the sea lion-covered beach are worth a visit. Junco Lagoon is located high on San Cristobal, at an altitude of 700 meters is a unique ecosystem on the Islands. El Junco has been the object of a study in which the sediments on the bottom of the lake were analyzed to uncover information about the vegetation and climate of the Archipelago thousands of years ago.

A nearby islet, Kicker Rock, a giant uplifted rock, shaped like a sleeping lion is split in two and provides a passage for small vessels to pass through.

Isla Lobos is a small island separated from the main island by a narrow stretch of calm waters. The rocky shores provide a nesting ground for the blue-footed boobies (in season) and an area for the sea lions to rest and play.

Santiago Island is the fourth largest island and is currently uninhabited, though ruins of a salt mining operation can still be seen. Puerto Egas is a popular visitor’s spot and is famed for “Darwin’s toilet” a striking tidal phenomenon where water is “flushed” through the lava rocks. Marine iguanas, birds, and sea lions are abundant, and the beach is great for swimming and snorkeling. You’ll be able to snorkel with sea turtles most of the year here.

Santa Fe Island is home to a small picturesque bay and anchorage on the island’s northeast coast. The bay has two trails for visitors to explore the area. One of these trails leads to a scenic viewpoint on top of a cliff, followed by an area where a species of land iguana can often be seen. The second trail is a short walk from the beach to an unusually tall prickly pear cactus forest.

Genovesa Island has abundant frigate birds and other notable seabirds, hence its nickname, “Bird Island”. The small beach at Darwin Beach is filled with frigatebird nests, swallow-tailed gulls, red-footed boobies, and a number of tidal pools. The trail past the tidal pools has excellent views of the cliff formations along the coast. Prince Philip’s Steps is a steep path that leads through yet another seabird colony where the highlights are Storm Petrels that behave differently than any others on earth, only returning to their nests at night to avoid predators.

The island has extraordinarily beautiful landscapes complete with cliffs and pinnacles where hundreds of marine birds rest. During, the 17th and 18th centuries, pirates used the bays of the island for maintaining their ships, and supplying themselves with fresh water, tortoise meat, and firewood.

North Seymour Island is located north of Baltra, where the Santa Cruz airport is located. North Seymour is a low, flat island, formed by the uplift of a submarine lava plate. It is covered with low, bushy vegetation, which is home to the largest colony of the magnificent frigate birds (Fregata magnificens) on the Galapagos. During certain times of the year, North Seymour is also home to a large population of blue-footed boobies.

Daphne Island is a large tuft volcano cone that has been eroded by the constant crashing of waves around the island’s perimeter. Vegetation is sparse, and ground cover is minimal consisting of only scattered shrubs. A huge colony of blue-footed boobies nest within the two small craters. Visitation is very restricted by the Galapagos Nationa Park due to ecological sensitivity. This is where the book “The Beak of the Finch” takes place and where authors Peter and Barbara Grant did their groundbreaking scientific research on evolution.

South Plaza is one of two small uplifted islands that are a short distance from the east coast of Santa Cruz Island. South Plaza has a unique Sesuvium and Opuntia landscape, which provides some of the most interesting wildlife observations available in the Galapagos. Land iguanas, frequently in the shade of a cactus, are easily seen from the trail. Swallow-tailed gulls, along with various other sea birds are seen soaring between the land and the sky and the protected rocky seashore is prime habitat for a large colony of noisy sea lions. VIEW ON MAP

Rabida, located behind the picturesque sea lion-strewn, the dark red beach is a salt-water lagoon where flamingos are often seen. A beautiful hike to the left of the beach is excellent for birdwatching, exploring the red coastline, and the palo santo forests whose stark contrast to the red earth provides striking photo opportunities.

Full Articles About Each Island in Galapagos