Look to the east of the Galapagos Islands, and you’ll see San Cristobal Island, a 558-square-kilometer (215-square-mile) landmass home to pristine wildlife-packed  beaches, alien-like lava fields, and lush highlands. It’s made up of three or four extinct volcanoes melded together, creating a diverse landscape that’s the ideal habitat for a stunning array of fearless creatures.

San Cristobal is famous for being the first Galapagos island that Charles Darwin stepped foot on in 1835. Formerly called Chatham Island, it’s the fifth-largest island of the group and home to the oldest human settlement in the archipelago. Today, it’s only one of four inhabited islands in the archipelago.

Serene and laidback, San Cristobal is the idyllic picture of a remote island in the middle of the Pacific Ocean. The entire coastline is home to large colonies of playful sea lions, and the island boasts impressive numbers of blue- and red-footed boobies, frigatebirds, marine iguanas, and even its own endemic giant tortoise species. Visitor sites range from white-sand beaches to wildlife reserves to world-class dive sites, while activities include hiking, kayaking, surfing, snorkeling, and diving. For adventurers who want an authentic tropical island vacation, few destinations compare to a San Cristobal tour.

One of only two airports receiving flights from the Ecuador mainland, San Cristobal Airport is on the edge of town in Puerto Baquerizo Moreno. Many Galapagos cruises start or finish here. 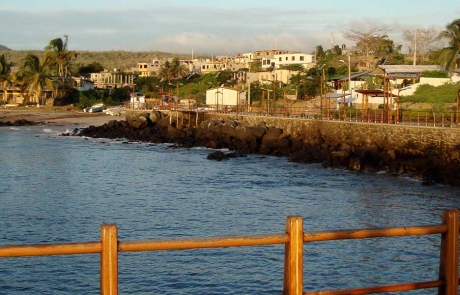 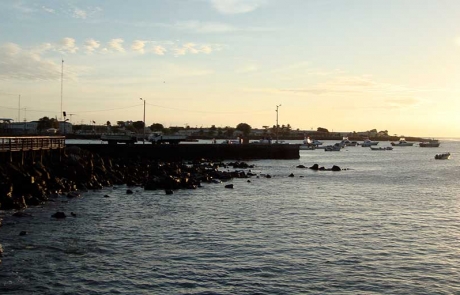 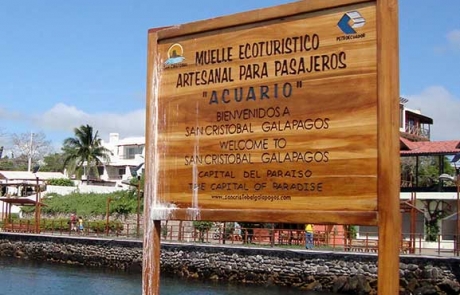 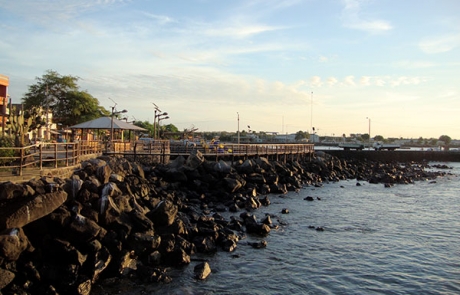 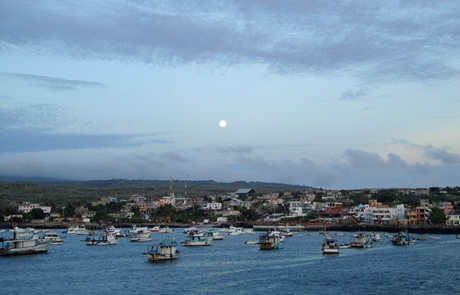 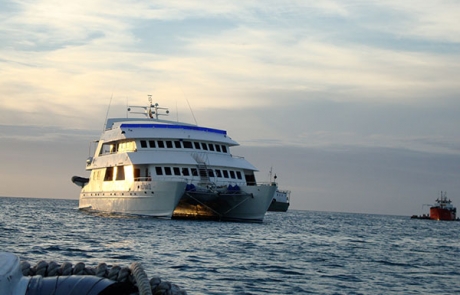 On the western tip of the island sits Puerto Baquerizo Moreno, the capital of the Galapagos and the port city and traveler’s hub of San Cristobal. Most of the island’s permanent residents live here; it’s the second-largest community in the archipelago. The laidback city is also one of the few places in the Galapagos Islands where travelers can actually spend a few nights. There are plenty of hotels to choose from, as well as dining and nightlife spots.

Ecuadorians and other South Americans hail Puerto Baquerizo Moreno as a fantastic surfing spot. Surfers often head to Tongo Reef and Punta Carola Beach, both within walking distance of the port city. Notable sights include the coral beach of the Sea Lion Rookery (El Malecón Rookery). Visit the Interpretation Center for a complete history of the Galapagos Islands, from its volcanic roots to modern times.

Roughly 6 kilometers (3.7 miles) east of the capital, El Progreso was established in 1869 and is the oldest surviving human settlement in the Galapagos Islands. It sits at the foot of Cerro San Joaquin; while the village used to be a penal colony, it’s now a quiet farming community.

A 45-minute trail from the Interpretation Center, Frigatebird Hill is a birder’s favorite. It’s the only place where the magnificent and great frigatebirds inhabit the same colony.

Follow the same trail as Frigatebird Hill to Punta Carola, a sandy beach frequented by surfers for perfect waves. With a reef break for beginners and a point break for experienced surfers, this is the ideal spot to hang ten for wave riders of all levels.

A beautiful stretch of beach near Puerto Baquerizo Moreno, La Loberia is named for the sea lions that have made a home on its scenic shores. Besides watching the sea lions frolicking or napping, the beach is a popular spot for swimming and surfing. At low tide, travelers can snorkel with sea lions and turtles in a protected lagoon. Keep an eye out for other animals like iguanas and frigatebirds.

A horse-shaped cove around 30 minutes from the capital by boat, Ochoa Beach is a rocky beach with a thriving colony of Galapagos sea lions. Ghost crabs, hermit crabs, and sea urchins are common on these shores, along with birds like herons, pelicans, and blue-footed boobies. Clear, shallow waters make it an excellent snorkeling site for travelers who prefer exploring underwater.

Isla Lobos translates to Sea Lion Island, so it’s not surprising that this white-sand islet is teeming with playful sea lions. Snorkeling is a popular activity, with the sea lions joining in the fun and swimming with the travelers. Rays, turtles, and tropical fish are a few of the other marine life snorkelers will glimpse underwater. Travelers may also embark on the 1-kilometer (0.6-mile) walking trail across the island to spot wildlife like blue-footed boobies, frigatebirds, and Sally Lightfoot crabs. Lobos Island is an hour-long boat ride from Puerto Baquerizo Moreno.

Kicker Rock—a massive rock formation rising out of the Pacific—is one of the best snorkeling and diving sites in the Galapagos Islands. This great slab of volcanic rock is the remains of a tuff cone, soaring around 140 meters (459 feet) over the ocean. Hammerhead sharks call Kicker Rock home; with some luck, divers will be able to spot a few in the waters. Other marine animals in this underwater paradise are sea turtles, Galapagos sharks, marine iguanas, and an endless stream of tropical fish. This visitor site is accessible via boat or kayak.

Located across Kicker Rock, Puerto Grande is a lovely crescent-shaped beach on the northern coast of San Cristobal. It’s a fantastic swimming beach, with white sand, glassy blue waters, and pleasant views of Kicker Rock and Puerto Baquerizo Moreno. Delight in lively wildlife in the area, including hermit crabs, blue-footed boobies, and other aquatic birds. Tales of buried gold have long drawn hopeful treasure hunters to the bay—all of them with little success.

Sail to the northern coast on a San Cristobal cruise for Cerro Brujo, a powdery white beach perfect for swimming and snorkeling. Sea lions and Sally Lightfoot crabs mill about the shore, while Galapagos rays and sea turtles swim in the turquoise waters. A tranquil freshwater lagoon lies behind the beach, home to a flurry of avian life like blue-footed boobies, pelicans, yellow warblers, great blue herons, and different finch species.

Like other coastal areas on San Cristobal, a colony of sea lions rules the shores of Punta Pitt. But this golden sand beach features more exotic wildlife than just pups. Explorers will be delighted to discover that Punta Pitt is one of the best spots on the island for wildlife viewing. All three booby varieties in the Galapagos live here: blue-footed, red-footed, and Nazca. Highlights include two frigatebird species, swallow-tailed gulls, and other sea birds. Enjoy the best bird sightings on a two- to three-hour scenic trek up the cliffs and be rewarded by fantastic views of the island.

Found on the northeast part of the island, Jacinto Gordillo Tortoise Breeding Center is about an hour-long drive from Puerto Baquerizo Moreno. Here, the famous Galapagos giant tortoises live in captivity until they are fit to be released to their natural habitat.

The 6-hectare (15-acre) Cerro Colorado is another giant tortoise reserve and breeding center in the San Cristobal highlands. Hatchlings are born without incubators, then live in a semi-natural habitat. Travelers can also learn more about the unique species at the visitor center. It’s also a good place to see the endemic Calandrinia galapagosa plant.

The remote Puerto Chino is a beautiful white beach for swimming and snorkeling with sea lions and sea turtles. It also features the only beach break on San Cristobal, making it the ideal spot for surfing newbies. Visit Puerto Chino by catching a taxi from Puerto Baquerizo Moreno.

Perched in the highlands 700 meters (2,297 feet) above sea level, El Junco Lagoon is one of the rare freshwater sources on San Cristobal. Contrary to its name, this ancient site isn’t a lagoon but a volcanic crater lake. El Junco gets its name from the junco plant, and its leafy surroundings are teeming with a multitude of bird species, including mockingbirds and frigatebirds. Lucky birders may even get a glimpse of the San Cristobal mockingbird, which is endemic to the island.

Typical of the Galapagos Islands, wildlife viewing is the main draw of San Cristobal. King of these shores is the sea lions; travelers won’t have to look very hard to get a glimpse of these playful pups. The Galapagos sea lions are everywhere, but they’re especially abundant in Isla Lobos—it is named Sea Lion Island, after all!

Beyond the overwhelming numbers of sea lions, the island is home to a dazzling assortment of birdlife. Punta Pitt is one of only two red-footed booby breeding sites in the archipelago, and one of the rare places where you can spot all three species of boobies found in the Galapagos. Frigatebirds fly overhead, along with coastal and migratory birds. This is also the only place in the world to catch a glimpse of the San Cristobal mockingbird, also called the Chatham mockingbird.

San Cristobal’s underwater gems are also worth exploring, with the waters around the island flourishing with marine life. Beyond the sea lion colonies, there are sea turtles, manta rays, eagle rays, hammerhead sharks, white-tip reef sharks, Galapagos sharks, and many other tropical fishes. Dolphins even show up every now and then. The towering Leon Dormido islet is a short boat ride from town and features world-class snorkeling and diving spots.

Other wildlife highlights on the island include fur seals, marine iguanas, Sally Lightfoot crabs, and hermit crabs, among others. San Cristobal is also home to an endemic giant tortoise species.

Explore the visitor sites of San Cristobal on a land-based tour or a liveaboard cruise. Fortunately for travelers dreaming of these shores, there are plenty of Galapagos Islands cruises and tours that sail to the island, ranging from luxury expeditions to more budget-friendly boat trips. Diving-focused tours are also available. There’s also the option of staying a few nights in one of the many San Cristobal accommodations in Puerto Baquerizo Moreno.