Santiago Island is home to a variety of flora and fauna, an archipelago of massive volcanic rock formations surrounded by pristine waters and abundant marine life. Located in the western central part of the archipelago, it is formed by two volcanoes that overlap. The island consists mainly of basaltic lava fields created by the flow of molten rock. Many people visit it as a place of wonders during their time on the Islands due to its massive lava formations and landscape features.

James, Santiago, or San Salvador are just a few of the many names given to the Galapagos’ fourth-largest island. Herds of giant tortoises inhabit this island along with flamingos and other exotic wildlife, including the Rooster Geese, Yellow-crowned Night Heron, and Flightless Cormorant. Though they are currently uninhabited, these tropical islands were formed during the last two million years, and several shipwrecks from different eras have been discovered around its shores.

Santiago Island was one of the last islands Charles Darwin visited, where he stayed the longest, and he regarded its landscape as “the most striking scenery in the world.” The diversity of life is staggering, with sea lions, blue-footed boobies, and dolphins wading in the saltwater lagoons. During a cruise through this archipelago, immerse yourself in its diverse ecosystems by hiking volcanic hillsides or sampling the waters around rocky outcrops. Santiago also has some of the best snorkeling spots in the Galapagos Islands, and kayaking around the coast is one of our favorite ways to explore this beautiful island. 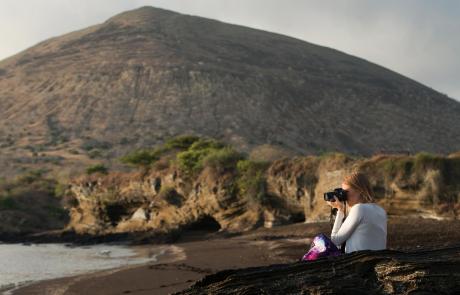 James Bay, located on Santiago Island’s northwestern coast, provides access to Puerto Egas, the Salt Mine, and Espumilla Beach on a Galapagos cruise. This is where Charles Darwin made landfall on Santiago during the Beagle’s legendary journey.

The small town of Puerto Egas is a favorite spot for nature lovers, who come here to spot hundreds of fur seals. The site is one of the three main attractions in James Bay and sits on the southern end of the bay. Here you’ll find deep pools and caves in the volcanic shoreline, where fur seals lounge around and play alongside marine iguanas, land iguanas, and sally lightfoot crabs. It is the best place for hiking in the cool weather, and its easy access makes it an ideal location for those who don’t have much time to spend on their trip.

The north end of James bay’s Espumilla Beach is a breeding ground for sea turtles. Flamingos and white-cheeked pintail ducks can occasionally be spotted in a tiny seasonal lagoon on the interior trail. In the dry zone, a wide variety of terrestrial birds can be spotted. Visitors can hike the beach, lagoon, and arid zone in this preserved island natural sanctuary. At either end of the beach, marine iguanas graze on the rocks. Snorkelers frequently see sharks, rays, and octopuses while at the beach.

From Puerto Egas, a two-mile inland trail leads to the summit of the former salt mine crater. Dedicated salt extraction firms, now gone, were established here in the 1920s and 1960s by sailors stopping to gather salt to preserve fish and meat (including flesh from the nearby gigantic tortoises). It is thought that the mine is a tiny volcanic cone. Flamingos, Galapagos hawks, and a variety of other species can be spotted in the crater’s seasonal saltwater lagoon.

At the northwestern edge of Santiago Island, visitors can find Buccaneer Cove, a beautiful natural wonder. As the name suggests, pirates and whalers used to visit this part of the Galapagos archipelago. A dinghy ride is the only way to see the area because you can’t disembark. Unusual-looking rock formations rise from the sea. Seabirds like swallow-tailed gulls, boobies, brown noddies, pelicans, and herons, as well as the sea lions and fur seals, inhabit the area. Along with swimming at Buccaneer Cove, you can also snorkel and dive.

Visitor sites like Sullivan Bay’s offer a rare chance to stroll across a recent lava flow and take in its stunning structural features firsthand. Lava flowed in the second half of the nineteenth century, causing the area to be submerged. Trail near Sullivan Bay spans pahoehoe lava, dotted by pyroclastic cones, like eastern Santiago’s bleak, volcanic scenery. And it’s not hard to get there: visitors can walk along the trail while marveling at the collection of small cones. Despite its barren appearance and lack of vegetation and wildlife, don’t forget to bring your camera.

Chinese Hat Island is one of the most recognizable of the Galapagos Islands. It looks like an old-fashioned Chinaman’s hat, a gently sloping cone rising out of the clear volcanic water. But its unique shape has not always been here. The island was formed when one of Santiago Island’s volcanoes violently erupted long ago. Lava and rocks spewed out to form a volcanic spatter cone which was then carved by erosion into its present shape over many millennia.

From a wet beach, tourists can enjoy the white coral sand and sleepy sea lions. An eerie black lava landscape awaits at the beachside route’s end. As you walk down the shore, Sally Lightfoot crabs and American Oystercatchers are among the creatures to look out for.

Cousin’s Rocks is a popular diving and snorkeling spot located just off the East side of Santiago. The site is named for the triangular rock, which rises over 33 feet out of the water to create a natural arch that makes for great photo opportunities. Cousin’s Rocks offers wildlife viewing opportunities for sea lions, fur seals, sharks, rays, and sea turtles, in addition to fantastic snorkeling sites.

Santiago Island is the fourth largest island in the Galapagos, with an area of 19,250 hectares and a length of 12 kilometers. It is home to a wide variety of wildlife, including land and marine iguanas, which inhabit rocky shores, sea lions, and a large population of sea turtles that lay their eggs along the beaches. With more than 600 species of birds, including the flightless cormorant, blue-footed booby, black oystercatchers, Darwin finches, and a greater diversity of reptiles than anywhere else on earth, Santiago is an enchanting place for wildlife lovers.

The wildlife found in Santiago Islands is quite different from the other islands of the Galapagos. The land is dry and barren, with lots of cactus vegetation. Because there are so few water sources, animals that live here must be adapted to live off very little moisture.

North of the Galapagos archipelago is Santiago. Take a Galapagos cruise that completes the northern itinerary circle for the best snorkeling and sightseeing.